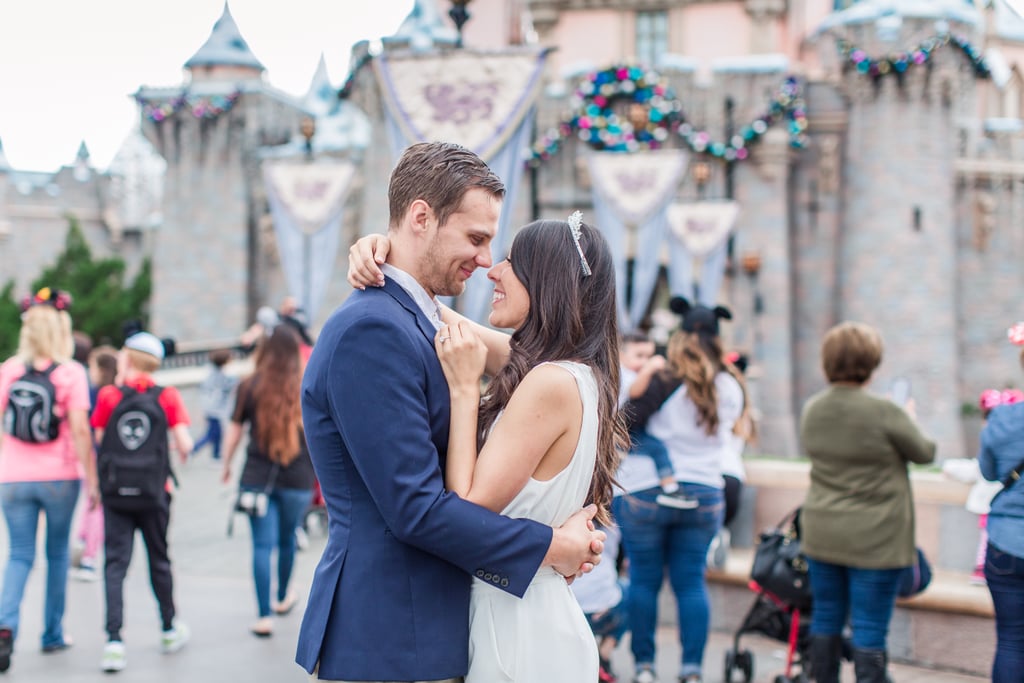 It's not uncommon to spontaneously burst into tears from pure joy when visiting Disneyland. So imagine the combination of seeing Sleeping Beauty's castle coupled with a marriage proposal by the love of your life. Yep, cue the waterworks. Erika and Jock met when both of them happened to be in Los Angeles for just one night. The two attended a concert separately, but fate brought them together.

"At the concert, I found the nearest balcony and perched on it, looking into the crowd of dancing people on the bottom floor," Erika said. "I spotted a guy who was taller than everyone and had the cutest little dance moves. I thought, 'He looks like he's having a blast, but there's no way I'd ever go into that crowd and find him.' The next thing I know, I look back at him and he is craning his neck, staring straight up at me, in between the coloured lights, darkness, and clamour of the show. I decided to wave down, to see if he was actually looking at me, and indeed he was. He took the elevator up to the third floor, said hello, and the rest was history!"

When it came to the proposal, Jock wanted to do something special for Erika, who he says is "the biggest Disney fan on earth." After three months of planning (and the help of close to 30 people!), he pulled off a surprise she will undoubtedly never forget.

"I sent her on a Disneyland scavenger hunt using friends and family members along the way," Jock said. "When we got into the park, she had to use the restroom and I basically disappeared. Then, she got her first visit from a friend of ours, who frequents Disneyland, so it wasn't too shocking to see him in the park until he pulled out a tiara. Then, I had a series of prerecorded videos that were clues to each of the next stops. So he showed her the clue, led her to find her best friends (flown in from everywhere) who also had a clue for her. She found them one by one until she reached me. One of the special moments was that she was able to see her mother for the first time in a very long time due to family circumstances — the entire family and friend filled proposal got her pretty emotional."

After she said yes, Disney cast members came out to congratulate the happy couple. It all ended with another surprise — an engagement party with more friends and family. It looked like a truly magical day!

Wedding
The Setting, the Gown, the Castle — This Northern Scotland Elopement Shoot Is Really Something Else
by Haley Lyndes 1 week ago

Disney Villains
Calling All Poor, Unfortunate Souls: Find Out What Disney Villain You Are Based on Your Zodiac Sign
by Sydni Ellis 17/10