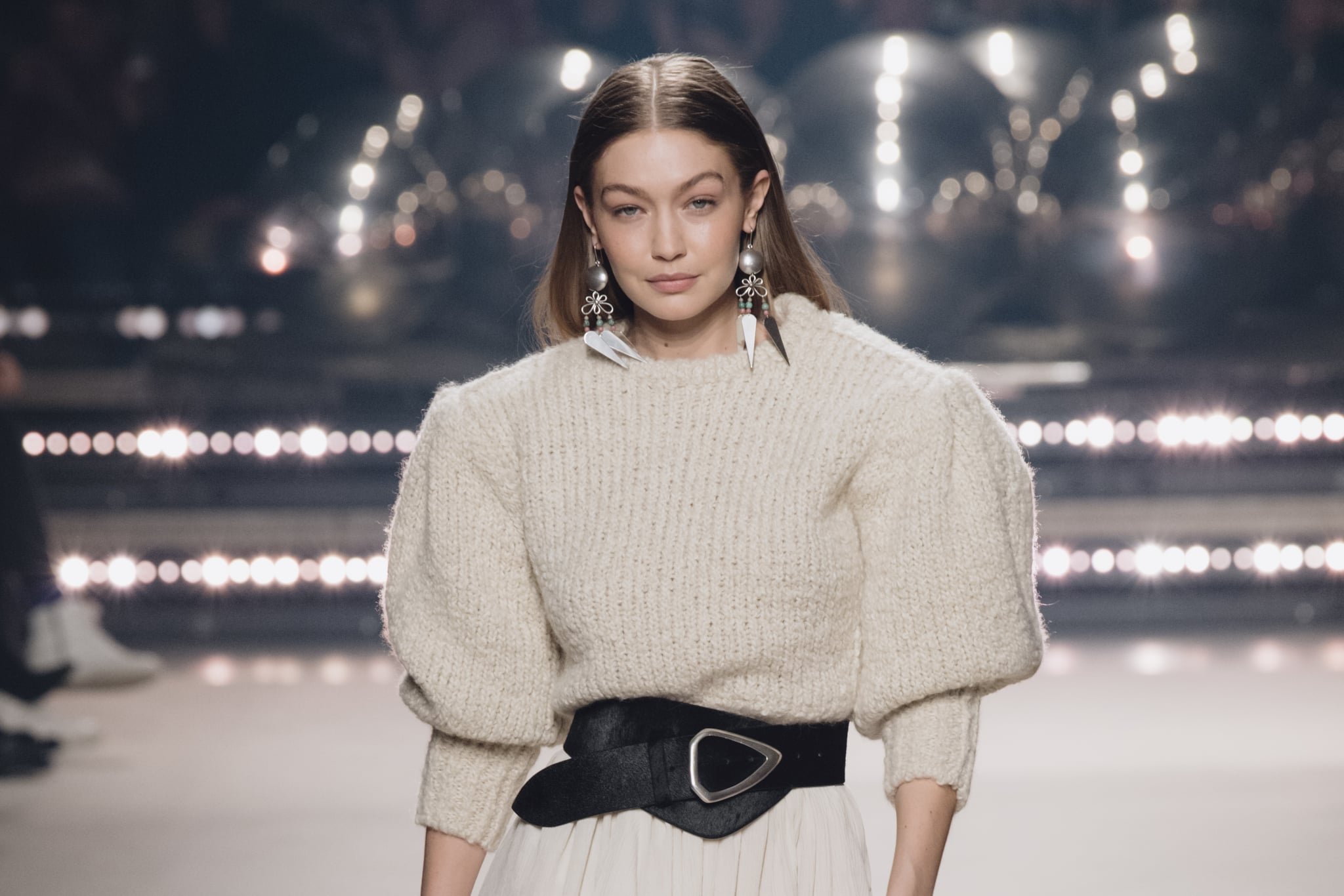 Gigi Hadid has written a personal plea to paparazzi and the press in an effort to protect the privacy of her 10-month-old daughter, Khai.

The first-time mum has only shared discreet photos of her baby, none showing Khai's face, on social media, and she wants her child's image to remain undisclosed – which is why she took to Instagram Stories to ask celebrity photographers, journalists, bloggers, and even fan accounts for their cooperation.

"As our baby grows up, we have to realise that we can't protect her from everything the way we wanted to and could when she was smaller," she wrote in her open letter.

Although Hadid and partner Zayn Malik spend most of their time on her family farm in Pennsylvania, she said that Khai "loves seeing the world" and that on recent visits to New York City, she has wanted the sun shade on her stroller lifted up. 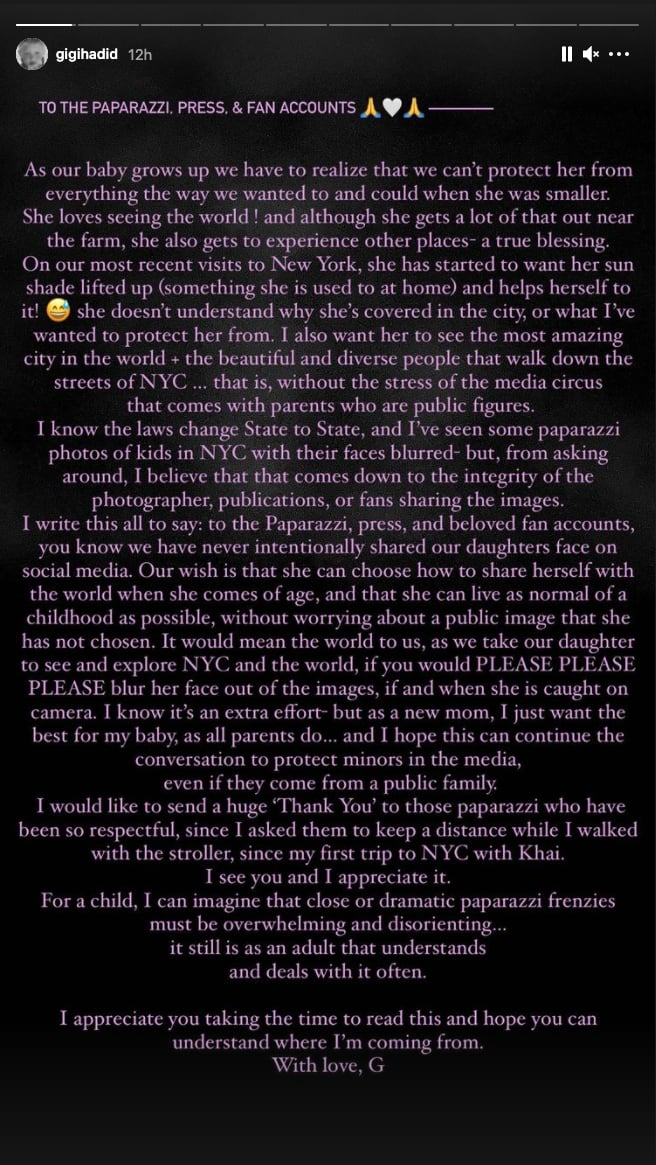 "She doesn't understand why she's covered in the city, or what I've wanted to protect her from," Hadid wrote. "I also want her to see the most amazing city in the world and the beautiful and diverse people that walk down the streets of NYC . . . that is, without the stress of the media circus that comes with parents who are public figures."

She acknowledged that laws surrounding photographing people in public places vary from state to state and noted that photos that blur the faces of celebrity children are often thanks to "the integrity of the photographer, publications, or fans" who share the imagery.

"Our wish is that . . . she can live as normal of a childhood as possible, without worrying about a public image that she has not chosen."

"Our wish is that she can choose how to share herself with the world when she comes of age and that she can live as normal of a childhood as possible, without worrying about a public image that she has not chosen," Hadid wrote. "It would mean the world to us, as we take our daughter to see and explore NYC and the world, if you would PLEASE PLEASE PLEASE blur her face out of the images, if and when she is caught on camera. I know it's an extra effort – but as a new mom, I just want the best for my baby, as all parents do . . . and I hope this can continue the conversation to protect minors in the media, even if they come from a public family."

It's true that protecting the privacy of children of celebrities has been an ongoing issue for decades. Most recently, Sophie Turner demanded paparazzi stop taking and selling photos of her 9-month-old daughter, Willa, whom she shares with husband Joe Jonas. (She said she was "sickened" and "disgusted" by these actions in Instagram Stories back in May.)

Hadid did make a point to thank those photographers who "have been so respectful" of her wishes thus far and have kept their distance while she walked with Khai in her stroller. "I see you and I appreciate it," she wrote.

However, she ended her humbling message with a reminder of how this experience affects her baby.

"For a child, I can imagine that close or dramatic paparazzi frenzies must be overwhelming and disorienting," she wrote. "It still is as an adult that understands and deals with it often."

Celebrity Families
Jennifer Lawrence Vows to Remain Tight-Lipped About Baby: I Want to "Protect Their Privacy"
by Kate Schweitzer 2 weeks ago 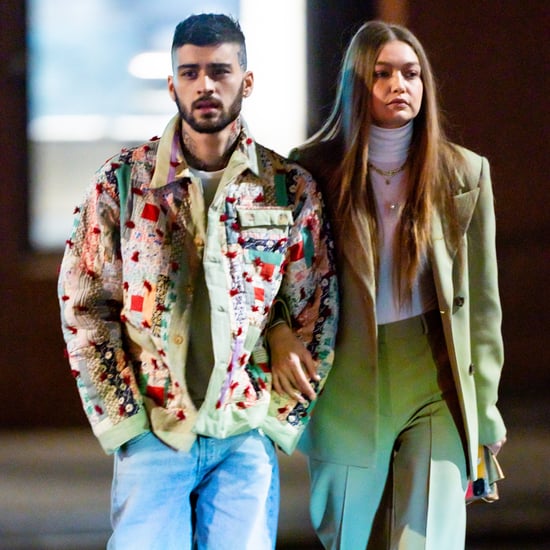 Gigi Hadid
Zayn Malik and Gigi Hadid Break Up After His Alleged Dispute With Her Mum, Yolanda
by Monica Sisavat 29/10

Celebrity Style
Shiloh Jolie-Pitt Might Have Borrowed a Gown From Angelina Jolie, but She Made It Her Own
by Yerin Kim 28/10