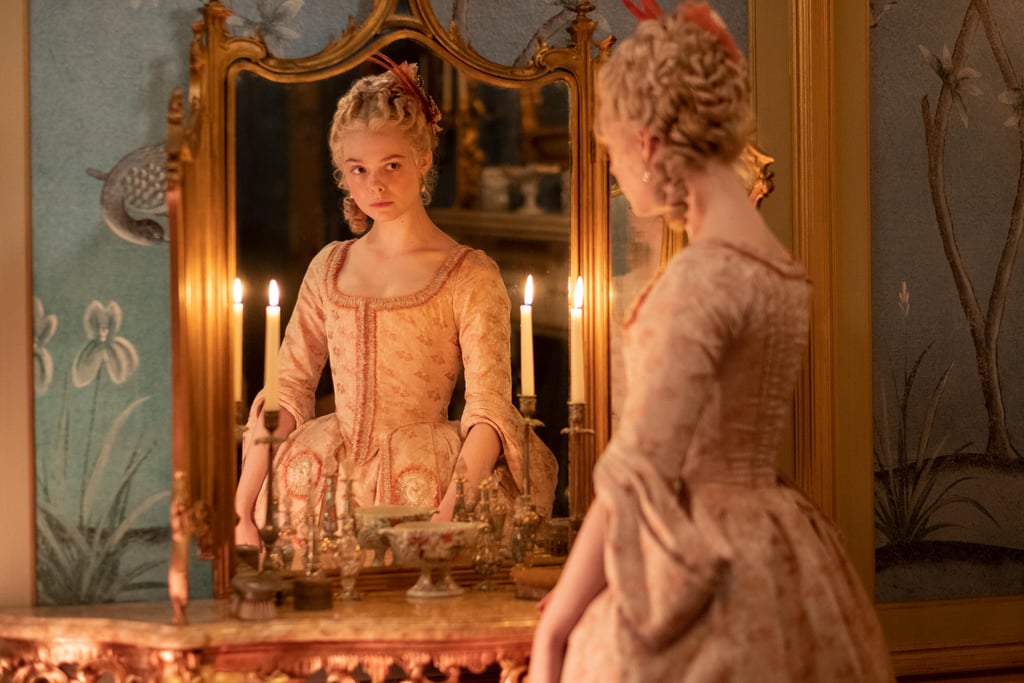 Elle Fanning and Nicholas Hoult star in Channel 4's new series The Great, which takes place in Russia in the late 1700s. As Catherine the Great, Elle gets to play the part of the longest reigning female ruler in the country, overthrowing her husband, Peter III. Of course, just one watch through the trailer will assure you that, yes, there are glorious dresses and elaborate fur coats here to see, all of which were imagined and brought to life by costume designer Emma Fryer, who previously worked on styling Anne Hathaway and Rebel Wilson in The Hustle.

"As an actress, Elle has worn a corset quite a few times, so she was used to [wearing it for up to 11 hours on set]."

When I spoke to Emma, she mentioned how lovely it was to come back to a period piece after focusing on more modern fashion, although, in order to dream up Catherine the Great's wardrobe, she did mix references from today's high fashion world with the contemporary. "I started with a huge resource of different visuals, from exhibitions that were in London at the time and portraits of Catherine the Great to a specific colour palette of very dark wine, red, gold, silver, black, burgundy, bronze, and grey. These shades depict the inside of the palace — this very high-end, 18th century European world," Emma told me.

You're probably wondering if Fanning was dressed in exact reinterpretations of any of Catherine the Great's looks (I know I was), but Emma said it was rather about finding Catherine's essence for her creations. "There may have been certain elements that came back to me subconsciously — say a neckline — but the fabric of the dress would have been completely different than a more contemporary fabric," she noted.

Elle, a lover of fashion herself, was very involved and excited to help Emma choose custom fabrics. The first thing they did was take her measurements so her underpinnings could be made, including her corset, which she wore on set almost every day for up to 11 hours. "As an actress, Elle has worn a corset quite a few times, so she was used to it."

When you scroll down, you'll become completely mesmerised by Elle's looks and also learn facts about the rest of the cast and their wardrobes. But first, check out some of Emma's inspired mood boards she was kind enough to share with POPSUGAR, which set the scene for every episode.

Related:
The 1940s Costumes in Hollywood Are So Glamorous, the Actors Wanted to Take Them Home
Previous Next Start Slideshow
HuluScreen StyleFashion INterviewElle FanningDressesNicholas HoultTV

Fashion Trends
Meet The Founders of DRESSX, the Company at the Forefront of MetaFashion
by Dana Avidan Cohn 1 week ago