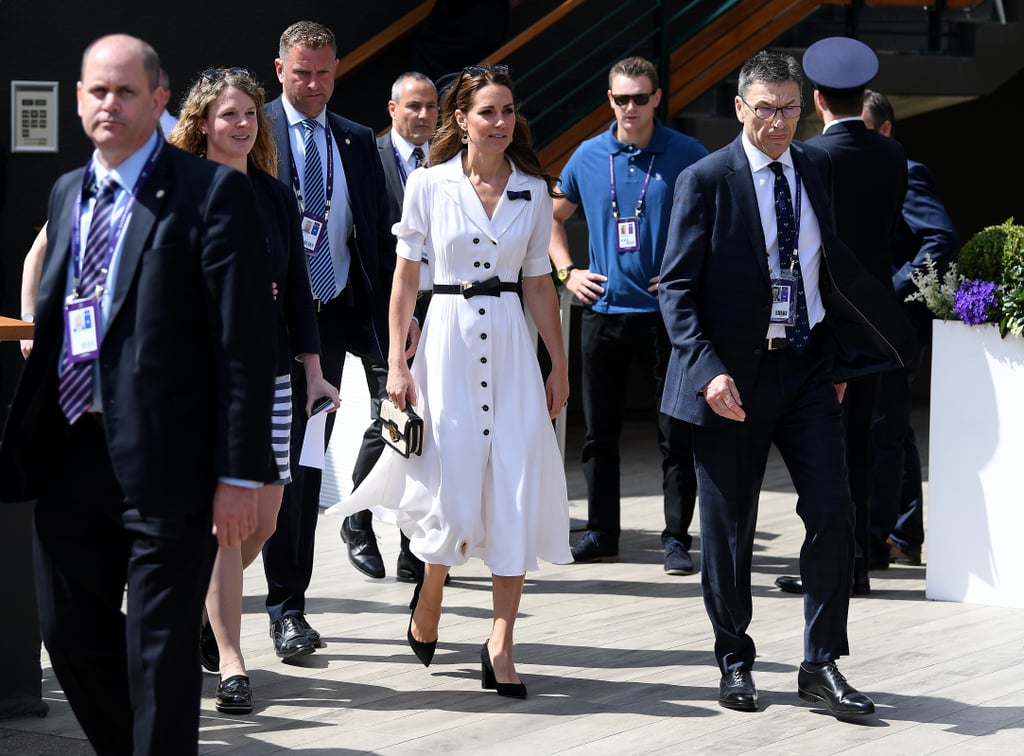 I Know You're Obsessed With The Duchess of Cambridge's Wimbledon Dress, but Let's Talk About Her Bows

The Duchess of Cambridge used her appearance at day two of the Wimbledon Tennis Championships to make a statement with her outfit. Yup, leave it to Kate the Great. She arrived at the All England Lawn Tennis and Croquet Club in a white button-front Suzannah dress that does come equipped with a matching belt. But that's where things get interesting. Kate added on her own black Alexander McQueen bow belt instead, which accented the details on her custom woven Alexander McQueen bag, her go-to Ray-Ban sunglasses, and, hey, that second bow that's pinned to her lapel. What's that about?!

Kate is an official patron of Wimbledon, and dark green and purple are the traditional Wimbledon colours, so it makes sense that she'd attract attention to her badge of honour with her accessories. The duchess appeared enthusiastic, cheering and talking to those in the stands, revealing her gorgeous gold Catherine Zoraida fern hoop earrings every so often. Kate finished her meaningful ensemble with a pair of Gianvito Rossi Piper suede pumps. We know that, despite the quirky little add-ons here, you're probably still focussed on picking up a similar modest midi for outdoor events this season, and we can't say we blame you. We've put in work and rounded up some lightweight styles that fit the bill — you've just got to admire the Duchess from all angles first. What, like it's hard?

Fashion Shopping
If You Ask Me, This Acne Studios Beanie Is the Only One Worth Having in the Winter
by Shelcy Joseph 1 day ago