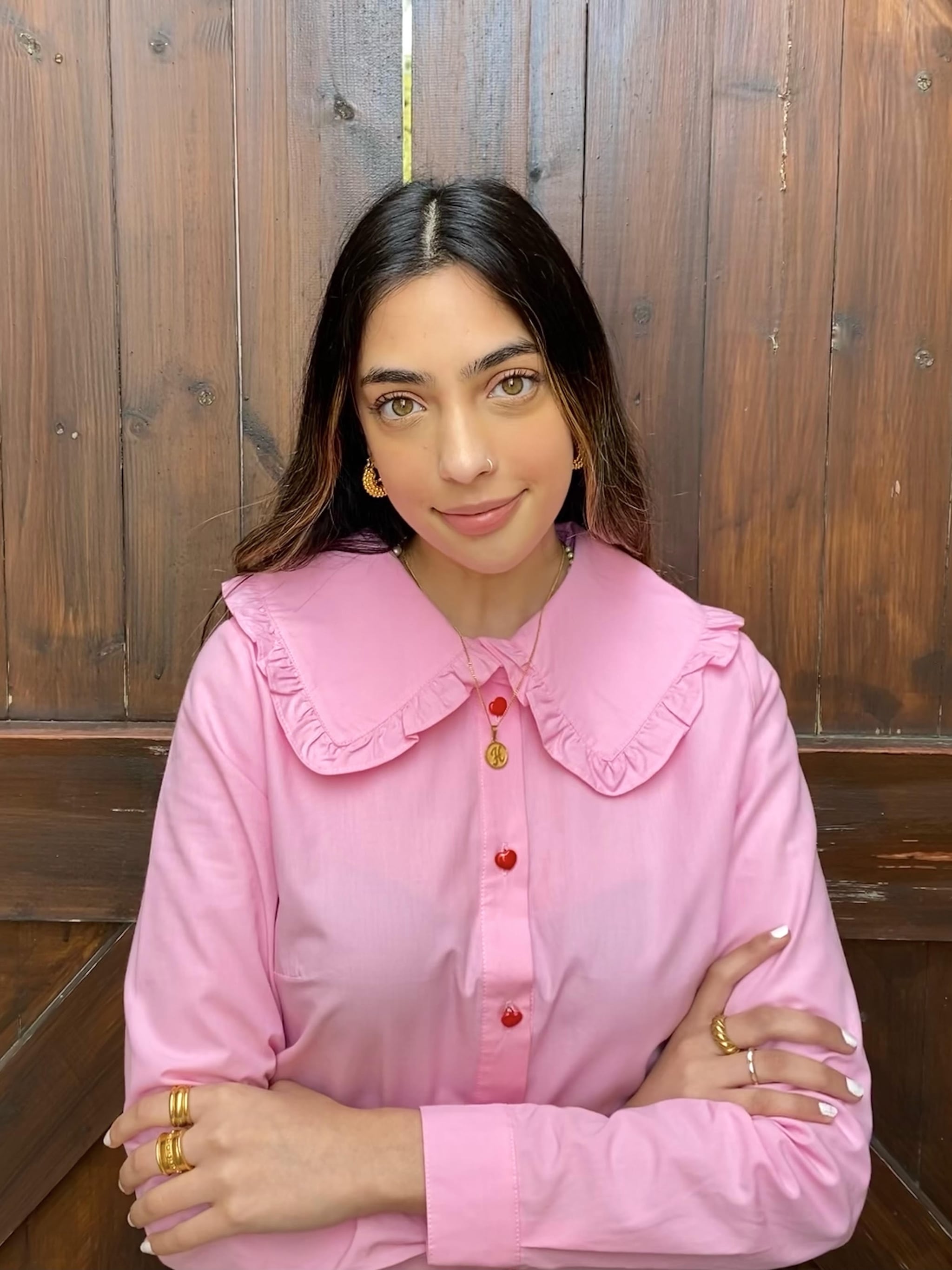 It's no secret that travelling alone is NSFW (not safe for women that is), but it shouldn't stop us from being able to explore the world and have new experiences. Amica is a new app that helps to facilitate just that, by providing tips for women to travel safely, whilst also helping them to discover new experiences with other like-minded women in the same area. We caught up with the founder, Heeral Pattni, to talk about the process of creating the app, the effect of lockdown on friendships, and how to make friends as an adult.

"I came up with the idea in summer 2019, at a time when I really wanted to travel by myself. Back then, I didn't really have the confidence to go at it alone because the concept was quite daunting," Pattni told POPSUGAR. "It was also a time when I was like, 'I definitely want to meet new people, but I also won't really know how to do that because there's no guarantee'. You have to be the kind of person that goes up to people at the bar and asks, 'can I sit with you?' and if you're not that person, it's quite hard, especially if you're in a new country," she explained.

Despite friendship apps like Bumble BFF and Huggle already existing, Pattni believes that there isn't anything out there specific to travel, and that "that immediate incentive to meet someone isn't always there on those apps, because you can just go back and forth in conversation. I want to know, 'how do I actually make that first move?'" With Amica, the interests of its users are visible on the app, which help to not only encourage conversation between those that share those interests, but also encourage the communal attending of events.

Logistically, the way it works is pretty simple. Pattni explained that "you sign up and there's four categories: activity, culture, food, and drink. Then you select interests within those categories, for example, wine tasting, cooking classes, nature, hiking, biking. We have cuisines on there, too: callow, kosher, vegetarian, and vegan, and there are options not to drink, too." You then build up a profile using photos, a bio, and some prompts or questions to help users get to know you better. The best part though is that all users must be video verified by the Amica team before they can start interacting with people on the app. Until then, features are limited to provide information only. It's Pattni's way of ensuring that the app is safe to use and promotes the safe transition from online to in-person friendships.

Women's safety is at the heart of the app, and Pattni told us that "we do everything we can to keep the platform really secure. We also have safety tips that pop up when you're about to message someone just to remind users, 'if you are meeting them, make sure it's in a safe place with other people around.' Whenever you're meeting someone from the internet, there are things that you can do to just take a little bit of extra care. The platform is meant to be a really safe and welcoming space, and it already feels really different seeing people's intro videos and the way that everyone's so nervous to travel alone, but open to making connections. That openness, I think isn't really replicated on any other platform."

As a South Asian woman, I'll admit that the idea of solo travel has never really felt like a viable option for me, purely because I know that it's something that my mum would never feel comfortable with. As a child, I struggled to convince her to let me stay at friend's houses overnight, and meeting up with friends outside of school was difficult unless she'd met their parents. Even at the age of 25, I can tell when she's hesitant for me to spend time with a friend that she's not heard of before. It's something that's pretty common among South Asian households, so the idea of having a video I could show her in advance of my potential travel feels incredibly useful.

Pattni said that "often, brown and Black women are left out of these spaces and out of this narrative [of travelling solo]. With me also being South Asian, I get to put that insight into this that otherwise wouldn't really be there. I think that's really special for me, too." Racism is something that women of colour who are travelling have to be aware of, too, and it's rarely spoken about. "When I'm going on staycations around the UK, I have to ask, 'but is it racist?', I just need to know because it feels very different," Pattni said, with apps like Amica helping to cultivate a safer travel experience for women, wherever they come from.

In terms of creating the app itself, the process began with being incubated by a venture builder and involved a lot of pitching to raise investment. "It's quite hard because you're constantly having that first conversation where you're like, 'this is what we've done. This is how amazing we are,' then they'll either ghost you or they'll ask for another one and they'll help to grow you. That was probably the hardest part of the process and continues to be. I think with startups, a lot of the time when people invest, they invest on the basis of background and the team. It's quite hard when you're coming into it quite fresh, and it takes a certain type of investment team that believe in you and take that risk. The [venture builders] take the idea and give you a team of developers and a project manager. They bridge that gap between a nontechnical founder and a tech team," Pattni said.

Pattni works with an incredible all-woman tech team that helps her to figure out how to make the app the best that it can be. She told us that a number of her team members actually found the app themselves before working on it, adding that "I think everyone involved has that personal motivation to be there as well." Despite the positive effects of having more women in the room, tech continues to be an industry that can be quite alienating for women, especially women of colour. "I look around and there's literally no one that looks like me. Being a young, brown founder, who's a woman can be difficult," Pattni told us.

As with most new ventures, Pattni had to make some sacrifices throughout the process of creating Amica. "Being completely honest, I think it did come at the expense of myself sometimes. It's hard to protect yourself in those because it is a really exposing and quite vulnerable space to be in. Where you're constantly putting yourself out there and opening yourself up to feedback after an hour-long conversation, and when someone sees only a snippet of the full picture," she explained. For Pattni, the hardest part was the fact that anyone who did share their criticism had no idea how long it had taken her to get to that point. "I think also you have to just take a step back, sit in your sauce for a bit, and be like, 'actually I've achieved a lot and no one else might be able to see that right now, but I can'. So I think that [the process] breaks you, but it builds you back up again as well."

The idea of making new friends is something that many of us have been much more open to after lockdown, having had time to reevaluate our existing friendships and what's important, which makes it the perfect time to try an app like Amica. "People got to sit with themselves and ask, 'what do I value?' and a lot of those reflections might have shaped the way that you think about friendship or you think about yourself and your interests," Pattni said. She added that "now it's time to be like, 'actually I have a newfound love of jazz. Let me go explore that with someone', and now you can. Whereas before it would kind of be like, 'I knew that about myself, but I didn't really know how to give it the space to breathe'. Also, you don't realise, but you've changed in the year as well. You come out expecting everything to be the same, because you feel like time hasn't really passed, but it has."

That said, making new friends as an adult is still something that not a lot of people know how to do. "At home, no one really talks about how hard it is to make friends when you get older. Where do you find them? Unless you work in quite network-based industries, it's quite hard to come across people. People still are open to [making friends], but there's no platform that solely facilitates that. For example, when you're in a co-working space and you see someone that you kind of want to be friends with, but you're like, 'will they be receptive to that?' They're not really sure. On this platform, everyone's actually on here to make those connections, and it's the space that's created specifically for that."

In terms of the future of Amica, Pattni hopes that it will eventually transition into more than just a travel app. "When we started, it was very much travel focused. But as it evolved and gathered a lot of momentum in lockdown, I think it proved that people are still open to having those sorts of travel-esque experiences where you're meeting new people and experiencing new things," she explained. "Events are something that we want to do in the future, based around the community that we've built because it is a community-based platform. Community for us is really important because it means bringing everyone together in this space where they have shared things that they feel welcome to explore." For now, Pattni is going to sit and bask in her accomplishments (something she admits is incredible difficult to do, as a founder), and enjoy spending time on the app and meeting new people. The ultimate goal though? Being out and having someone ask her if they've downloaded or used Amica. With an idea this good, we can't imagine that it'll take long.

Love Island
If You Don't Get an Invite to Casa Amor, This Love Island-Inspired Airbnb May Be the Next Best Thing
by Karenna Meredith 4 weeks ago

Disability
A Castle in Italy Has Braille That Describes the View — Why Isn't This More Common?
by Lauren Harano 13/8

Tech
It's Music to Our Ears! Here's How to Find Out Who Your Most-Listened to Artists Are on Spotify
by Lauren Harano 20/7

Bucket List
Scared of Heights? This So-Called "Bending Bridge" in China Will Give You Chills
by Lauren Harano 08/7