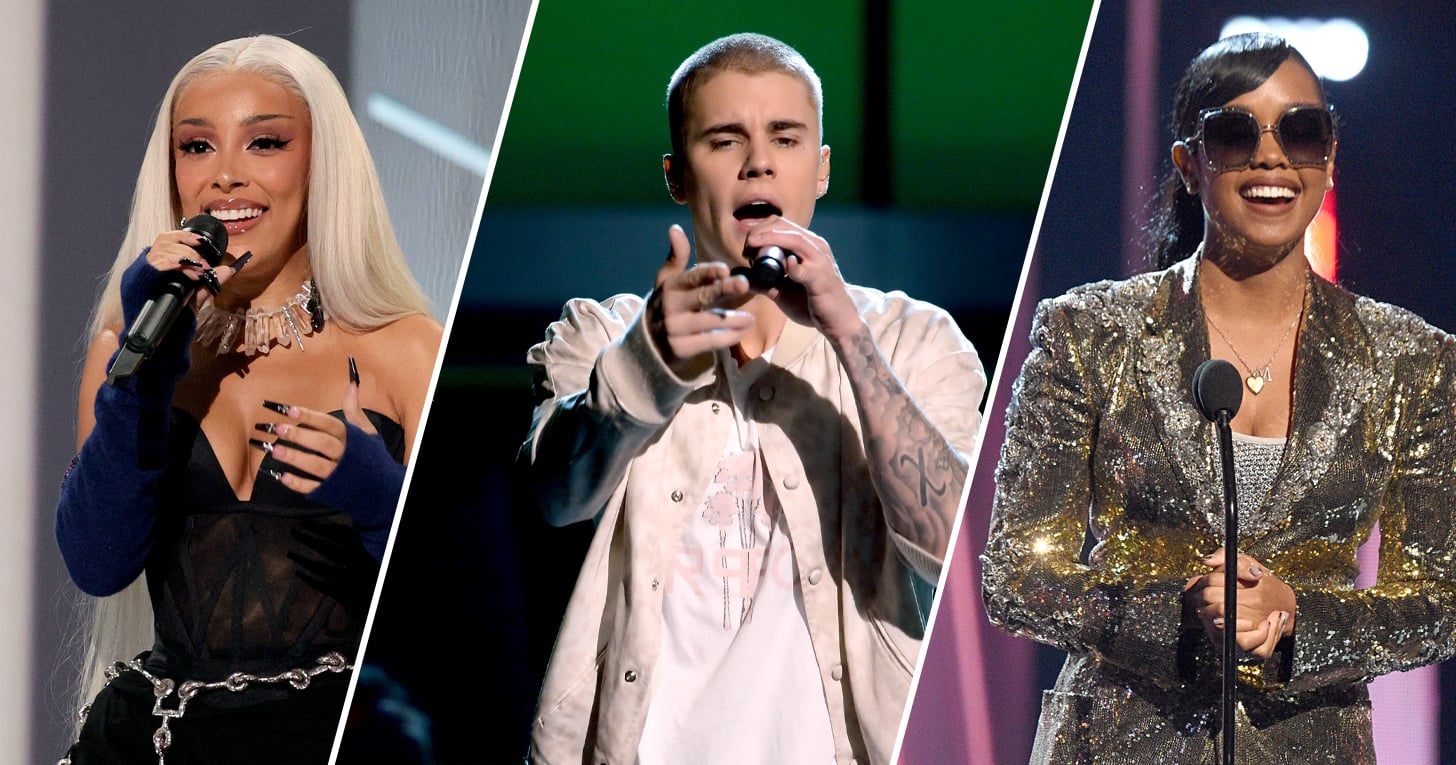 The nominations for the 64th annual Grammy Awards are officially here! The nominees were announced on 23 Nov. at the Grammy Museum in Los Angeles. This year, leading the pack with the most noms is Jon Batiste, with 11 total, along with Justin Bieber, Doja Cat, and H.E.R. — who snagged eight nominations each. Billie Eilish and Olivia Rodrigo also join the pool of most nominated artists with seven nominations each. Some standout artists who are this year's first-time nominees are Rodrigo, Saweetie, and Selena Gomez.

Heading into Grammys night, Rodrigo may make history if she wins all four general field categories she's nominated for — which will make her the second woman and the second-youngest person to ever do so! Also among the historic Grammy nomination group is JAY-Z, whose three nominations put him at a whopping 83 total in his career — pushing him past Quincy Jones and Paul McCartney with the most ever nominations! Ahead, check out the full list of nominees for the 2022 Grammys.

RECORD OF THE YEAR
"I Still Have Faith in You" by ABBA
"Freedom" by Jon Batiste
"I Get a Kick Out of You" by Tony Bennett and Lady Gaga
"Peaches" by Justin Bieber feat. Daniel Caesar and Giveon
"Right on Time" by Brandi Carlile
"Kiss Me More" by Doja Cat feat. SZA
"Happier Than Ever" by Billie Eilish
"Montero (Call Me by Your Name)" by Lil Nas X
"Drivers Licence" by Olivia Rodrigo
"Leave the Door Open" by Silk Sonic

ALBUM OF THE YEAR
We Are by Jon Batiste
Love For Sale by Tony Bennett and Lady Gaga
Justice (Triple Chucks Deluxe) by Justin Bieber
Planet Her (Deluxe) by Doja Cat
Happier Than Ever by Billie Eilish
Back of My Mind by H.E.R.
Montero by Lil Nas X
Sour by Olivia Rodrigo
Evermore by Taylor Swift
Donda by Kanye West

SONG OF THE YEAR
"Bad Habits" by Ed Sheeran
"A Beautiful Noise" by Alicia Keys and Brandi Carlile
"Drivers Licence" by Olivia Rodrigo
"Fight For You" by H.E.R.
"Happier Than Ever" by Billie Eilish
"Kiss Me More" by Doja Cat feat. SZA
"Leave the Door Open" by Silk Sonic
"Montero (Call Me by Your Name)" by Lil Nas X
"Peaches" by Justin Bieber feat. Daniel Caesar and Giveon
"Right on Time" by Brandi Carlile

BEST POP DUO/GROUP PERFORMANCE
"I Get a Kick Out of You" by Tony Bennett and Lady Gaga
"Lonely" by Justin Bieber and Benny Blanco
"Butter" by BTS
"Higher Power" by Coldplay
"Kiss Me More" by Doja Cat feat. SZA

BEST DANCE/ELECTRONIC RECORDING
"Hero" by Afrojack and David Guetta
"Loom" by Olafur Arnalds feat. Bonobo
"Before" by James Blake
"Heartbreak" by Bonobo and Totally Enormous Extinct Dinosaurs
"You Can Do It" by Caribou
"Alive" by Rüfüs Du Sol
"The Business" by Tiesto

BEST ROCK ALBUM
Power Up by AC/DC
Capitol Cuts — Live From Studio A by Black Pumas
No One Sings Like You Anymore Vol. 1 by Chris Cornell
Medicine at Midnight by Foo Fighters
McCartney III by Paul McCartney

BEST ALTERNATIVE ALBUM
Shore by Fleet Foxes
If I Can't Have Love, I Want Power by Halsey
Jubilee by Japanese Breakfast
Collapsed in Sunbeams by Arlo Parks
Daddy's Home by St. Vincent

BEST TRADITIONAL R&B PERFORMANCE
"I Need You" by Jon Batiste
"Bring It on Home to Me" by BJ the Chicago Kid, PJ Morton, and Kenyon Dixon feat. Charlie Bereal
"Born Again" by Leon Bridges
"Fight For You" by H.E.R.
"How Much Can a Heart Take" by Lucky Daye feat. Yebba

BEST R&B ALBUM
Temporary Highs in the Violet Skies by Snoh Aalegra
We Are by Jon Batiste
Gold-Diggers Sound by Leon Bridges
Back of My Mind by H.E.R.

BEST RAP ALBUM
THE OFF-SEASON by J.Cole
Certified Lover Boy by Drake
King's Disease II by Nas
Call Me If You Get Lost by Tyler, the Creator
Donda by Kanye West

BEST ROOTS GOSPEL ALBUM
Alone With My Faith by Harry Connick Jr.
That's Gospel, Brother by Gather Vocal Band
Keeping On by Ernie Haase and Signature Sound
Songs For the Times by The Isaacs
My Saviour by Carrie Underwood

BEST BLUEGRASS ALBUM
Renewal by Billy Strings
My Bluegrass Heart by Béla Fleck
A Tribute to Bill Monroe by The Infamous Stringdusters
Cuttin' Grass — Vol. 1 (Butcher Shoppe Sessions) by Sturgill Simpson
Music Is What I See by Rhonda Vincent

BEST COMEDY ALBUM
The Comedy Vaccine by Lavell Crawford
Evolution by Chelsea Handler
Sincerely Louis CK by Louis C.K.
Thanks For Risking Your Life by Lewis Black
The Greatest Average American by Nate Bargatze
Zero F***s Given by Kevin Hart

BEST SONG WRITTEN FOR VISUAL MEDIA
"Agatha All Along" by Kristen Anderson-Lopez and Robert Lopez feat. Kathryn Hahn, Eric Bradley, Greg Whipple, Jasper Randall, and Gerald White from WandaVision, episode seven
"All Eyes on Me" by Bo Burnham from Inside
"All I Know So Far" by Pink from PINK: All I Know So Far
"Fight For You" by H.E.R. from Judas and the Black Messiah
"Here I Am (Singing My Way Home)" by Jennifer Hudson from Respect
"Speak Now" by Leslie Odom Jr. from One Night in Miami...

BEST ARRANGEMENT, INSTRUMENTAL OR A CAPPELLA
"Chopsticks" by Richard Baratta
"For the Love of a Princess" by HAUSER, London Symphony Orchestra, and Robin Smith from Braveheart
"Infinite Love" by Emile Mosseri
"Meta Knight's Revenge" by The 8-Bit Big Band feat. Button Masher from Kirby Superstar
"The Struggle Within" by Gabriela Quintero and Rodrigo Sanchez

BEST ARRANGEMENT, INSTRUMENTS AND VOCALS
"The Bottom Line" by Ólafur Arnalds and Josin
"A Change Is Gonna Come" by Tonality and Alexander Lloyd Blake
"The Christmas Song (Chestnuts Roasting on an Open Fire)" by Jacob Collier
"Eleanor Rigby" by Cody Fry
"To the Edge of Longing" by Vince Mendoza, Czech National Symphony Orchestra, and Julia Bullock

BEST ENGINEERED ALBUM, NON-CLASSICAL
Cinema by The Marías
Dawn by Yebba
Hey What by Low
Love For Sale by Tony Bennett and Lady Gaga
Notes With Attachments by Pino Palladino and Blake Mills