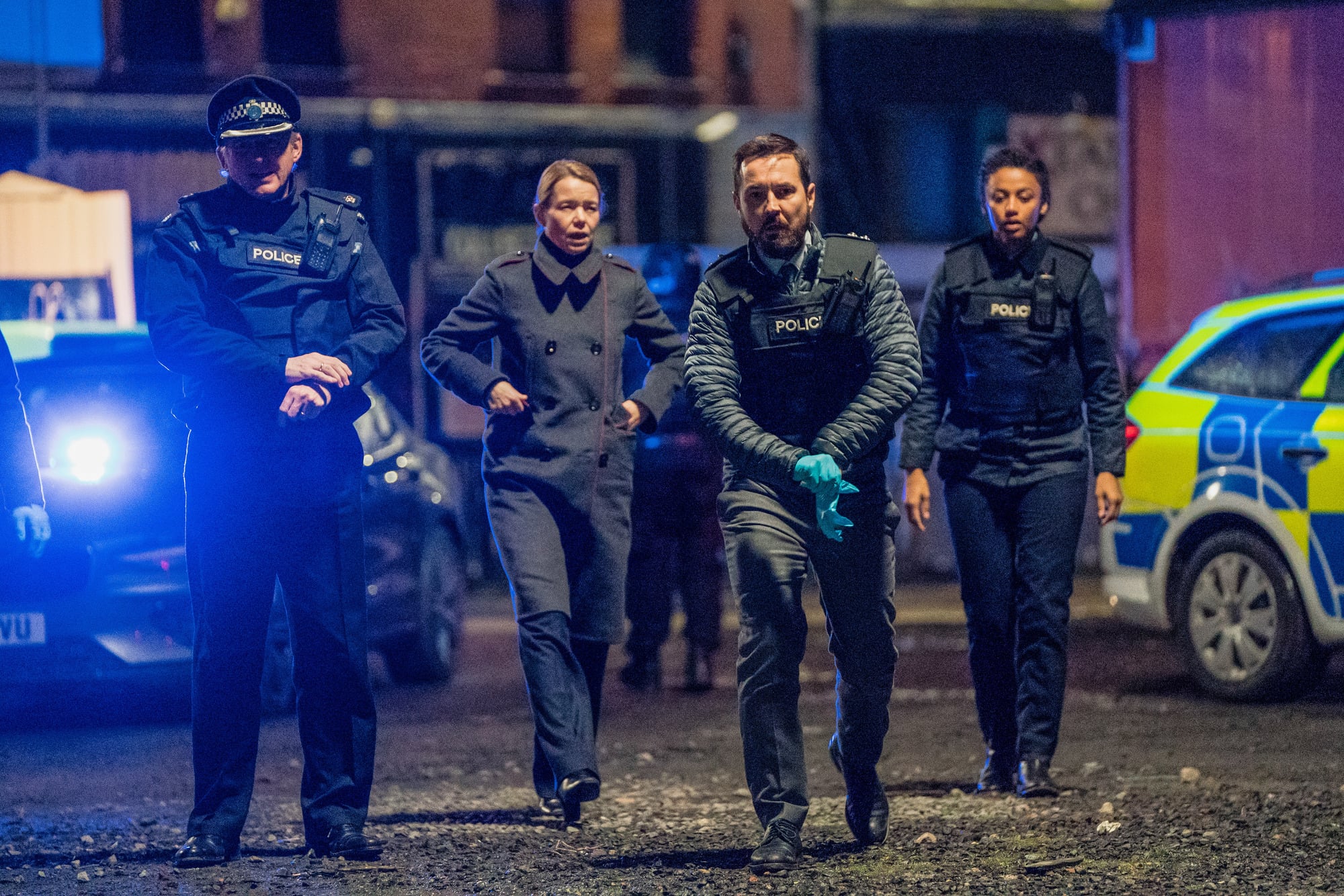 The penultimate episode of Line of Duty was an undeniable corker. You also read that correctly: the television Gods (or rather Jed Mecurio) saw fit to grace us with an extra episode for this series, taking us to a glorious total of seven. This week saw more revelations than a single episode usually teases us with — the script writers were absolutely on fire, offering up some of their best one-liners and slowly unfolding the complicated story an an expert way. The best performance of episode 6, however, should absolutely go to Kelly Macdonald for her portrayal of DSI Jo Davidson. The entire cast is consistently excellent, but kudos to Macdonald, who deserves all of the awards for a stonking performance that left us feeling so many emotions. That aside, let's get on with the important bits from episode 6, like dissecting Davidson's family history and the answer to who was on the receiving end of those two gun shots at the end of last weeks' episode.

We Can Say Goodbye to Ryan Pilkington

Everyone heave a sigh of relief, because it wasn't DI Kate Fleming (Vicky McClure) who got shot. It was that conniving little throat slitter Ryan Pilkington (Gregory Piper) who took two bullets to the chest and died immediately, saving anyone having to go to a hospital and finish the job. He absolutely had it coming, and in the spirit of handing awards for last night's episode, then the most hated and definitely not-to-be-missed character award goes to Pilkington.

Now the plaster has been ripped away, and everyone can feel content in the knowledge that Fleming is safe — although, halt the celebrations slightly, because DCS Patricia Carmichael (Anna Maxwell Martin) elbows her way to the front of the crime scene where Pilkington lays dead, and Fleming and Davidson are both missing. In a perplexing move, instead of staying at the scene and telling their story as it happened, the duo go on the run from the scene, leading Carmichael to announce them as armed and dangerous and must be stopped in their tracks.

Meanwhile, having fled the scene, Fleming shows incredible restraint when she asks Davidson why she led her to the rendezvous-to-be-killed — anyone else in the same position would not have remained so cool, surely. They make a getaway in DS Steve Arnott's (Martin Compston) grown-up and expensive looking car, but much to Fleming's confusion, are quickly tracked down in a police chase, and she suspects the two of them are in the frame for murder and have been set up by her former coworkers. Her shock and grief are palpable, when she does indeed see Arnott and the Gaffer (Adrian Dunbar) waiting to arrest her — the overhead spotlights on her as she surrenders her weapon making for quite the striking tableau as the Gaffer makes proclamations that she will be well looked after, and she is overcome with tears at their deception. The mates are all mates again though, when it later transpires that Kate wasn't set up by Arnott and Hastings, but that the dastardly Carmichael had secretly fit all AC-12 employee vehicles with trackers, which is how they could easily trace Fleming to Arnott's vehicle — the audacity.

Throughout quite an intense police chase, Fleming manages to question Davidson about her familial links to organised crime (OCG) boss Tommy Hunter (Brian McCardie). We know from the previous episode that the two were found to be related, and the capacity in which they were led to intense fan speculation. Davidson believes that Hunter was her mum's brother and, therefore, her uncle. However, it is later revealed to her by Arnott during her interview with AC-12, that Hunter was actually both her uncle and her father, news that is obviously sickening to her. She has also always remained cagey about her wider family, and it is revealed that the framed photo in her flat that she is consistently angry with is a picture of herself and her mother, Samantha Davidson. On feeling unable to protect Davidson from her criminal family, her mother sadly died by suicide.

Jo is incredibly reluctant to divulge information about the man she had so far believed to be her real father — "a bent copper", she explained — which will no doubt lead to fans leading their own armchair investigations into potential candidates and how this could impact the show. Diehard LOD conspiracy theorists have already decided that the number-one culprit to be the bent copper replacement father is Marcus Thurwell (James Nesbitt). Next in line is Patrick Fairbank (George Costigan), and bringing up the rear for the bookies is CC Philip Osborne (Owen Teale). Place your bets now, dear readers.

A large part of the episode is then handed over to AC-12 interviewing Davidson, which is headed up by DCS Carmichael, whose sarcastic line of questioning consistently ends with an equally sarcastic smile that of course never reaches her evil eyes. Actually, it's less of a smile and more of a forced up-turn of the corner of her lips; it's infuriating, whatever you want to call it.

Davidson rankles the Gaffer (and the audience), while still managing to be emotive, with the amount of times she answered with "no comment" — a fact that led the Gaffer to deliver one of his best angry one-liners to date. It was quite possibly the sentence, "Jesus, Mary, and Joseph and the wee donkey we must move this thing along before it all drives us all round the bloody bend", that finally forces Davidson to admit that, as a straight-A student, Hunter had hunted her down and enrolled her in a life as a bent copper to do his bidding. Let's face it, if that line was delivered by the Gaffer straight into your face, you'd admit to something, wouldn't you?

Davidson continues to not give much away, but does have the good grace to absolve PC Farida Jatri (Anneika Rose) of all crimes by admitting that she planted burner phones in her house. Let's hope poor Farida has now been released, because that part wasn't actually shown. Davidson also admits to planting files in DS Ian Buckells (Nigel Boyle) car and pushing him to make the surveillance errors that resulted in Carl Banks absconding before arrest. According to her, Buckells wanted Terry Boyle (Tommy Jessop) framed for Gail Vella's (Andi Osho) murder because he needed to be seen to be making progress on the case — and let's not forget that as far as we know, Buckells stood to gain from Vella's death because she was about to reveal the corruption behind the Lawrence Christopher case, which he was implicated in.

After finally admitting to staging the robbery to derail the entire Carl Banks arrest that she has denied since it took place in episode one, she also took the full blame for Pilkington's killing, which she was able to do by making sure her prints ended up on the murder weapon. It still doesn't end there — Davidson even points AC-12 in the direction of the disused former OCG printshop, a front for their criminal activities, where Gail Vella's stolen laptop and desktop computers were found, proving a link between the OCG and her death.

An emotionally drained Davidson repeats the phrase "I'm not bent" several times, despite admitting to being very much bent, thank you very much. This must be largely for herself, as she could have had a crime-free and promising life and has very much been a victim of her own DNA and familial ties. Repeating the phrase like a mantra could be her way of trying to reassure herself she is a good person, despite what she has been forced to do against her will.

Carmichael is Ruining Everything

If we are continuing to dole out prizes for this episode, then pantomime villain of the year is surely going to Patricia Carmichael, the veritable Dolores Umbridge of AC-12. She incites an urge to boo and hiss every time she enters stage left and to loudly yell "she's behind you", when she skulks around derailing interviews and cancelling surveillance at every opportunity. She continually guides Davidson's interview away from any pertinent lead that could point out any bent coppers and persistently echoes CC Osborne's long overused lines that there has been proven to be no corruption within the police force. "That's not true"! we are all shouting from our sofas, continuing with the pantomime heckling theme.

By demanding Osborne's picture be removed from the investigation board and admitting to a furious Hastings that she and Osborne don't trust him, she only acts to heighten the thought process that right now, she's looking more bent than a U-bend. In a testament to Anna Maxwell Martin's carefully crafted villain, she had brilliantly embodied a character we love to hate and currently stands as front runner with Thurwell, to be the fourth "H".

If you remember from last week, suspected OCG crime lord, and former bent copper Marcus Thurwell, was currently hiding out in Spain. On searching Davidson's apartment, the computer she was using to liaise with the faceless OCG member was found, and the IP address to whom she was communicating, traced to Spain. Thurwell being the man on the other end of that mysterious chat is looking entirely likely. However, Spanish police track him down, and his potential arrest is live streamed to AC-12. Hastings's mounting fury reaches fever pitch when instead of a satisfying arrest, two bodies are found, which are identified to be Thurwell and his wife. But hold your horses — it's unlikely he's actually dead; the show would hardly use a huge name in acting like James Nesbitt just to be a photo of a wanted criminal on a screen. Nesbitt is surely being set up for a big role in the next series. The second piece of evidence is that stills have already surfaced on the internet of the "bodies" being found, and the masked police officer who turns to the camera to confirm they are that of Thurwell and his wife, looks suspiciously like Thurwell himself.

Fleming is now free and has a lovely exchange full of "alright mate" with Arnott, and Davidson is fearfully being led to her cell. She really needs to watch out, because as she is ushered down the prison corridor to an ironic voice-over of Osborne talking about people suffering consequences, the terrifying face of the prison guard who routinely burns and breaks the bones of coppers in her care arrives, to sneer menacingly at Davidson. She's managed to make us feel quite sorry for her at this stage, and a quick break out seems to be in order, to save her and let her live the straight life she appears to so deeply want.

The familiar matey banter between Arnott and Fleming might be about to come to an end, as Arnott has been ignoring pop-ups on his computer screen from Occupational Health urging him to come for a review, like they are cookie consent agreements — a quick click and they disappear, not to be thought about again. After his prescription drug problem being ignored for a couple of weeks, it looks like his time is up, and he's going to have to answer for his addiction before too long. The final episode will be bittersweet, but let's hope for a stupendous end to what's been a belting season.