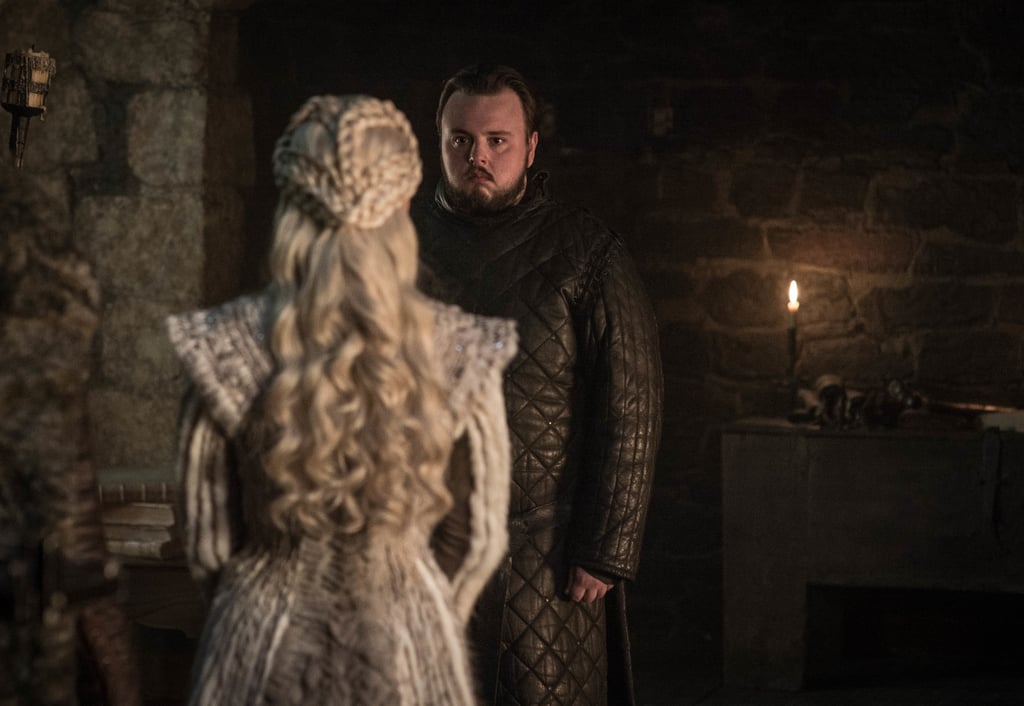 Game of Thrones: Watching Sam Learn About His Family’s Fate Was Just . . . the Saddest

What could possibly be more heartbreaking than watching the pure and kind Samwell Tarly take in devastating news with the world's saddest lip quiver? During the Game of Thrones season eight premiere, Sam has quite the uncomfortable interaction with Daenerys Targaryen, and actor John Bradley brought so much emotion to the scene that fans couldn't deal.

Originally, Daenerys comes to Sam to thank him for saving the life of Jorah, who stands beside her. (Remember how Sam healed Jorah's greyscale?) Grateful for Sam's help, she asks what she can do to repay him, and Sam asks to be pardoned for two crimes: stealing books from the Citadel and taking a sword from the Tarly home. It's then that Daenerys realises Sam is the son of Randyll Tarly and brother of Dickon Tarly — men she had her dragons burn after they refused to bend the knee. Um, awkward?

As she connects the dots for Sam, he first makes a little joke, thinking only his father has been killed — the father that didn't show him much love anyway. At least he'd have his brother! Right? Er . . . right? Well, no, and when Daenerys lets the other shoe drop, allowing the news of his brother's death to sink in, the look on Sam's face is as painful as it gets. She's not particularly warm throughout the exchange, either, and actor John Bradley addressed the moment in an interview with The Wrap.

Related:
Game of Thrones: This Is Why That Scene Between Daenerys and Sam Was So Tense

"She's telling him kind of without any sense of compassion at all. She comes at it in a very clinical way, and a very cold and a very detached way," Bradley said. "And it feels psychopathic, really, that she didn't offer him any kind of comfort at all. She says, you know, 'They refused to bend the knee.' And that's a very pragmatic way of dealing with it, 'They disobeyed me, and so I killed them.' And in that moment he sees what a dangerous figure she is, and that's what motivates him to tell Jon [about his parents]."

It certainly is a tense conversation, and fans took to Twitter to call out both the insane discomfort plus just how devastating it really is to see Sam Tarly's heart get broken. Keep reading for a look at viewers' reactions, then relive the biggest moments from the buzzy premiere.