In light of threats by the hackers who have wreaked havoc on Sony, the studio has halted release of the film The Interview. The group behind the hacking, "Guardians of Peace," is suspected to have ties to North Korea, where the comedy is set. The film depicts James Franco and Seth Rogen as Americans who get sent to North Korea to assassinate Kim Jong-un, the country's dictator. While North Korea hasn't taken responsibility for the hacking, back in June, a spokesman for the North Korean government criticised the movie, saying that "The act of making and screening such a movie that portrays an attack on our top leadership . . . is a most wanton act of terror and act of war, and is absolutely intolerable." But what exactly is the attack on the country's top leadership? With the movie's release pulled, not a lot of people will be able to see how the movie depicts Kim Jong-un or his fate. Since I caught the movie at an earlier press screening, I can share what happens — and what all the fuss is about. Spoilers ensue. 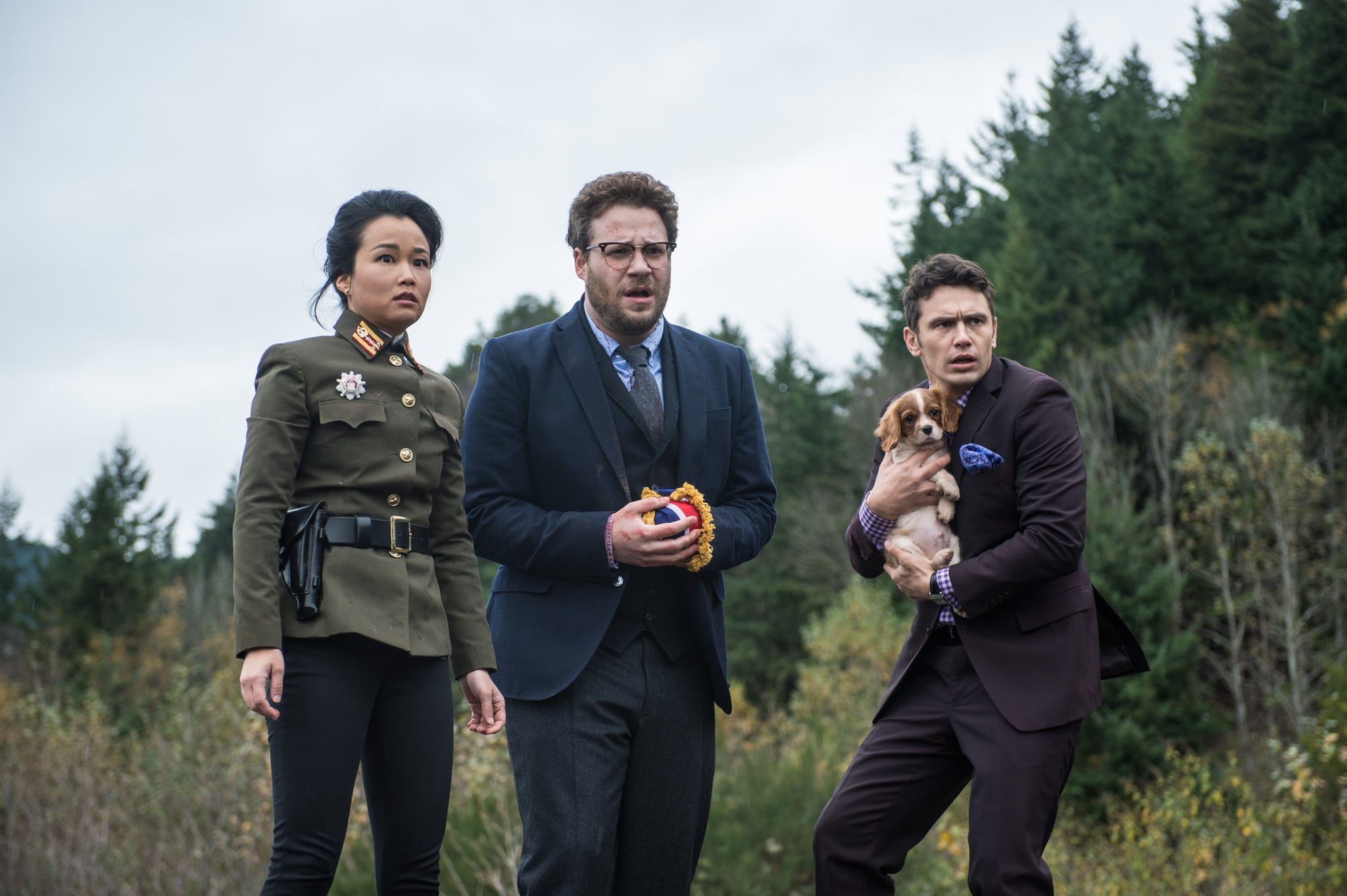 Kim Jong-un is played by Randall Park in a hilarious and completely irreverent performance. He's portrayed as a man with cold, despotic tendencies, but a soft spot for certain things, which is where the comedy comes in. He's a superfan of Dave Skylark, Franco's journalist character, which is how Skylark lands the gig interviewing him in the first place (the CIA intervenes with the assassination plot). When Franco and Rogen's characters get to North Korea, Kim Jong-un reacts like a giggling fanboy upon meeting Skylark, then takes him for a day of fun in his compound, where he reveals a love of Katy Perry and margaritas. It's not necessarily flattering, but that's what makes it funny. Meanwhile, his abuses of North Korea are verbally referenced, not shown (save for a fake grocery store meant to make the country look robust).

The way Skylark is originally supposed to kill Kim Jong-un is with a ricin strip applied to his hand during a handshake. It's thwarted when Skylark changes his mind after spending so much time with Kim Jong-un, and he thinks they're friends. When the interview finally goes down, Skylark realises the error of his ways and then tries to take down Kim Jong-un in another way: by making him cry and showing him as weak so his own people won't see him as a god anymore. It works, and Kim Jong-un cries on air, but just when you think, "oh, they don't even kill this guy in the movie at all," the violence starts. He shoots Skylark, who's wearing a vest, and as Skylark, his producer (Rogen), and a North Korean ally flee the compound, they "borrow" Kim Jong-un's tank. As Kim Jong-un, in a helicopter, prepares to fire at the group in the tank and simultaneously launch nuclear weapons at the rest of the world, Skylark prevails and fires from the tank, blowing up the dictator and his helicopter.