Welcome to Big Break, where some of the most influential figures in the beauty industry reflect on the moments that made them — from the good to the bad and everything in between. Here, celebrity manicurist Michelle Humphrey shares some of her best days working in London, her most memorable celebrity clients, and why being sacked from your job isn't always a bad thing.

If it wasn't for getting painful acrylics back when she was a teenager, Michelle Humphrey might have never been the successful celebrity nail artist she is today. "I used to sit there when I was 15 getting acrylics, and the whole experience used to be so painful," Humphrey told POPSUGAR. "Everything was painful, from start to end." She was determined it didn't have to be like this. That's why Humphrey started doing her own DIY acrylics at home from the age of 15. And unlike today, where there's a wealth of information at our fingertips thanks to YouTube, Humphrey got to work teaching herself — from scratch.

Beauty college is where she got to really hone her craft as a nail technician. "The [college therapists] would say, 'Oh, you're a natural,' and I was like, 'Well, I've kind of been doing this by myself for five years now,'" she said. Once she passed all of her college exams, Humphrey worked in nail salons in West Sussex and London for about seven or eight years through the 2000s. "I was constantly getting trained and skill building," Humphrey said, adding that she had a blast working in salons. "I was such a London girl, Thursday, Friday, and Saturday night I'd be out in town, it felt like my calling to be in London."

Back then, though, a salon job could be quite mundane compared to now. "Back in the 2000s, it would just be 10 clients who all wanted acrylic french nails. All of them want the same thing, so you're doing the same thing 10 times over, and after a while, it was just killing my brain a little bit." Luckily, that was around the time that nail art started to take off. But whilst the average consumer was just discovering a new trend, nail art was something that Humphrey had always been doing. "Remember those flicks, dots, and flowers? I'm going to bring them back," she said. 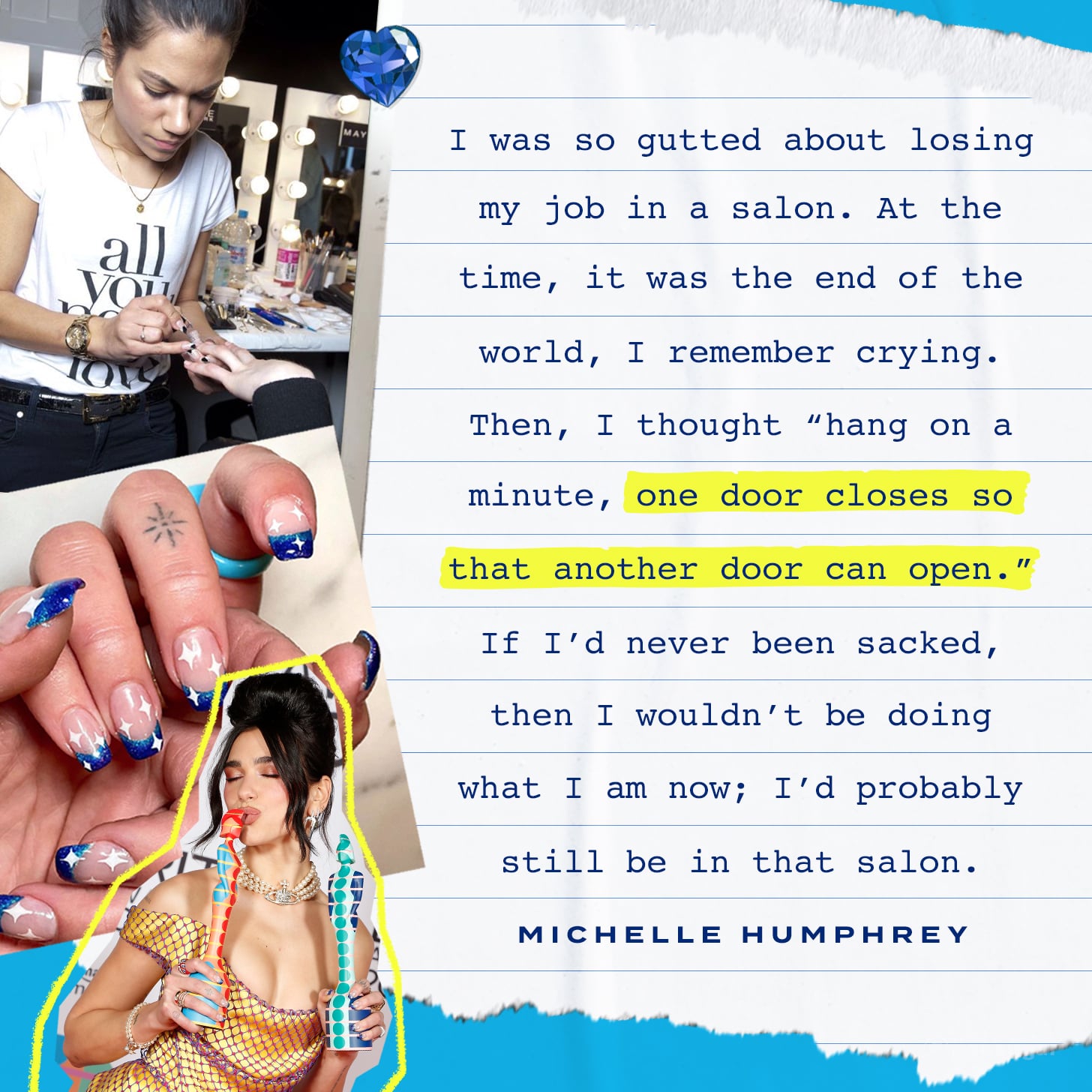 But despite this, Humphrey felt that she'd hit her ceiling of potential at the salon. "I went from being the newbie at the bottom — where everyone's overseeing you and doing all of my training and skill building — to being at the top of the salon, and I thought, 'Where do I go from here?'" From the get-go, she knew it wasn't going to be owning her own place. At her first salon job, Humphrey remembers someone telling her that "whatever you do in life, don't get a salon." That piece of advice stuck.

"Lily Allen is a bit of a nail queen, in my opinion."

With owning a salon out of the question, Humphrey considered going into training and teaching, but realised quickly that to do that she'd need more training on how to be a qualified educator. Her final option was doing fashion session work (so working on photo shoots and at fashion shows), which is exactly what she did. "I was working in London and met my agent [Luke] through a mutual friend — and that's been it for 10 years now," she explained. "Luke and I have been on this journey as friends, and I actually couldn't imagine life without him."

Unlike most people who enter the world of session work, Humphrey never really assisted anyone. She'd worked a couple of fashion shows whilst working at the salon, so she already knew a few people on that side of the business. But aside from contacts, a natural talent, and a love for the job, Humphrey credits some of her success to breaking into the industry at the right time when it wasn't oversaturated.

"Nail polish was outselling lipstick, and there was this massive boom, so I got in before that, and it wasn't a very saturated industry. In the industry, the big names in the UK were Michelle Class, Marian Newman, Jenny Longworth, Lorraine Griffin, and Jenni Draper — but there weren't many of us doing it at that point. There are a lot more people now." And of course, social media wasn't a recognised platform for promotion like it is now. "I just used to post photos of pizza," Humphrey joked.

"Nail technology has also really evolved in the last five years," she added. "I started 16 years ago professionally, and the products back then versus the products now are completely different." Everything in the industry is changing and evolving. "Every now and then I'll see a new product on a Korean nail Instagram page, and I'm like, 'What is this wizardry?'"

Humphrey solidified her work as a celebrity manicurist with her first high-profile client: Lily Allen. It was about seven years ago, and according to Humphrey, Allen sent her a DM on Instagram asking her to do her nails. So she went to the singer's house and worked her nail-art magic. It wasn't long before Humphrey's work got featured in the Metro with a story all about Allen's Glastonbury manicure. "I thought, 'This is actually getting a whole feature in the paper? Whatever I'm doing, it's working.'"

"I'm so proud of where Dua Lipa is now; she's doing so well, and it's really nice to be part of that journey."

"I've got a lot to thank [Lily] for, and I got other clients' bookings off the back of her," Humphrey said. "She's always been so out there with her nails. Everyone was getting nude or plain nails, and she'd have something extra — like light-green ombré manicure encrusted in Swarovski crystals and nail piercings — something more exciting."

Humphrey doesn't have any big career regrets, though. "Maybe I should have just left my first salon job earlier; I actually got sacked from one of them. I got sacked from two salon jobs," she admitted. "I was so gutted about losing my job in a salon. At the time, it was the end of the world, I remember crying. Then, I thought, 'Hang on a minute, one door closes so that another door can open.' If I'd never been sacked, then I wouldn't be doing what I am now; I'd probably still be in that salon." 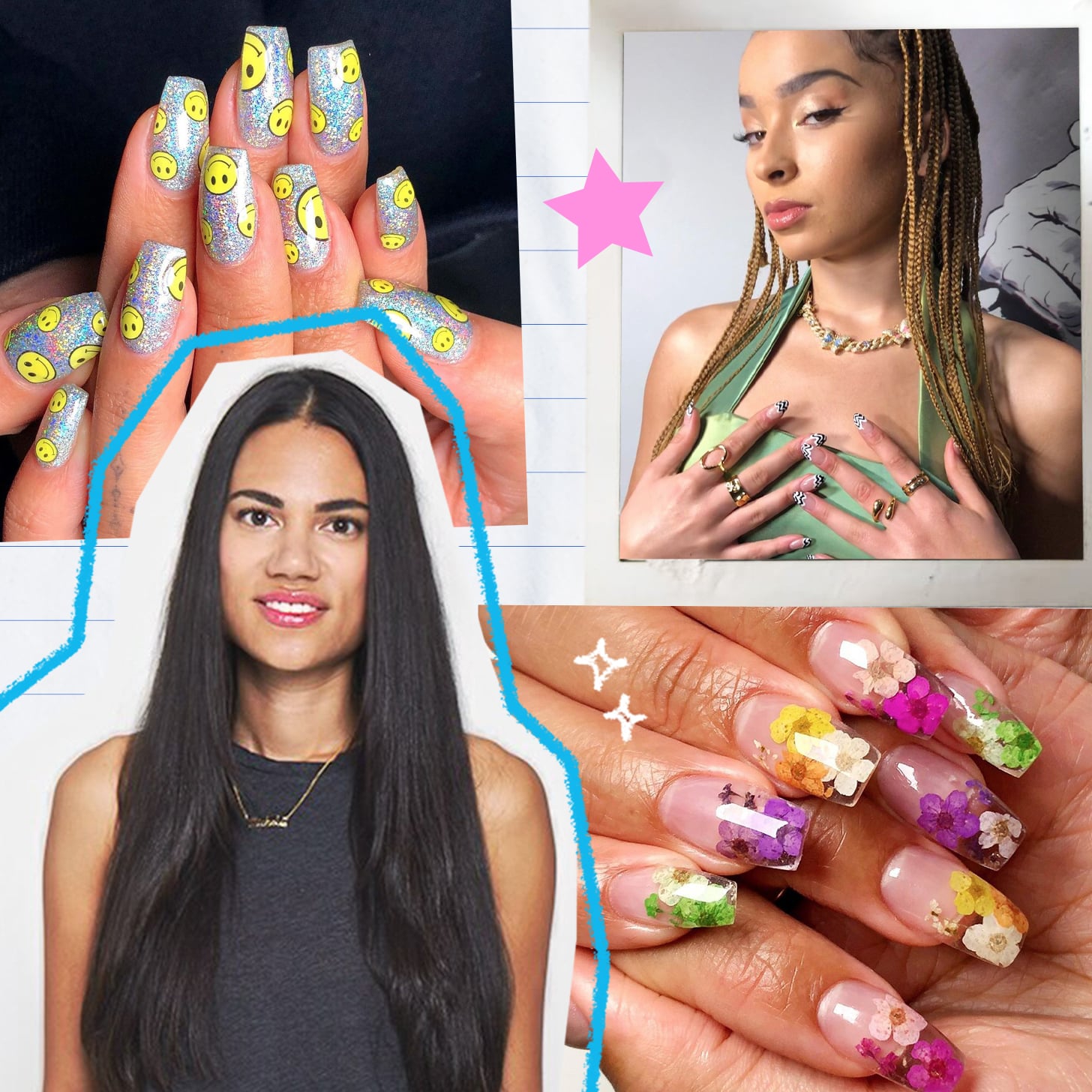 When it comes to her "pinch me" moments, Humphrey has quite a few . . . although she doesn't readily admit to them. Anyone who has met her will agree that she's arguably one of the humblest people in the beauty industry. Her first really big break was working with photographer Miles Aldridge. "When I started getting booked with him, it was a great feeling because you know you're going to get a great beauty moment from it — it was always epic working with him," she said. Doing Katy Perry's nails was another great career highlight for Humphrey. "The first time I met her, I flew up to Glasgow and I did her nails to Radio 1's Big Weekend and I flew back with her in her private jet down into London," she recalled. "Then I got flown out to Ibiza to work with her again; it was the best day ever."

Humphrey has also loved collaborating with Dua Lipa and growing with her. "I'm so proud of where she is now; she's doing so well, and it's really nice to be part of that journey." Working at events like the BRITs is always special to Humphrey: "The atmosphere is buzzing, everyone's always excited, and it's nice to be a part of something that I feel the whole nation wants to be involved in." Humphrey also worked on the Spice Girls reunion tour, which was a major moment. "I'm from that era, which meant it felt so nostalgic."

Humphrey's status as the most modest person to walk this earth came when we asked her what she wants to go down in beauty history for. A simple: "hopefully known for my nail art." We're sure that's not going to be that difficult, though. With incredible designs like Katy Perry's rainbow nails, Dua Lipa's crystal-embellished design, and Lily Allen's golden chrome french, Humphrey's nail art is sure to go down in the beauty history books. 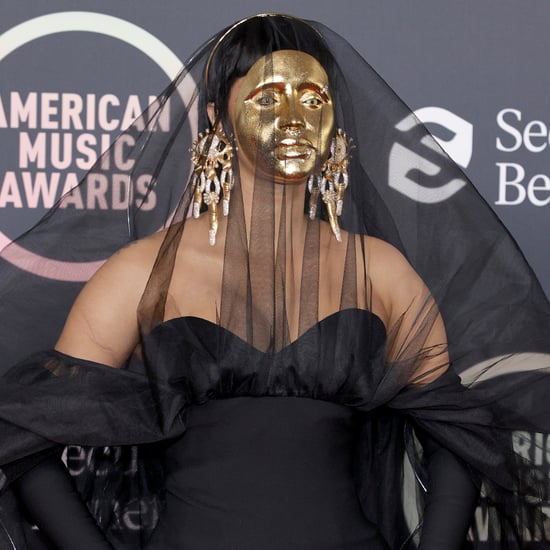 Award Season
Once You Get Past Cardi B's Gold Mask at the AMAs, You Won't Be Able to Look Away From Her Nails
by Yerin Kim 4 days ago

Celebrity News
Tom Holland and Zendaya Open Up About Their Relationship: "We Sort of Felt Robbed of Our Privacy"
by Njera Perkins 1 week ago