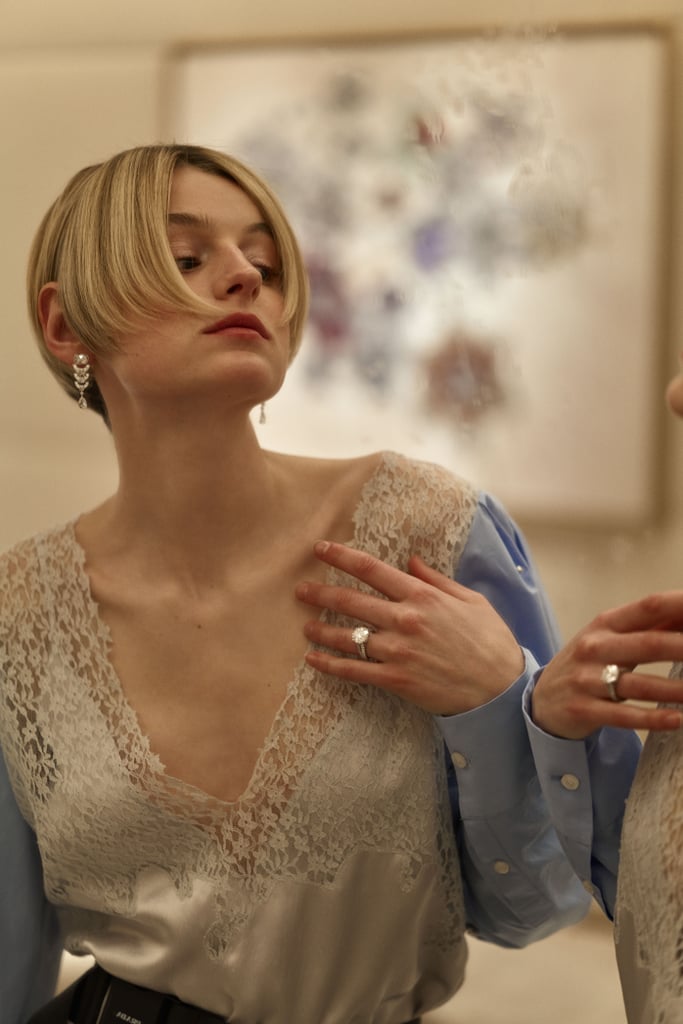 Emma Corrin is well-known for her portrayal of Princess Diana on The Crown, but during award season she's been channelling other '90s icons. Corrin's role in the Netflix series earned her several nominations across a variety of award shows, and each event allowed her to experiment with beauty in a new way. After the SAG Awards on April 4, Corrin's hairstylist Daniel Martin told Vanity Fair all about the nostalgic heartthrobs the actress wanted to emulate.

"The past six months is all about boys," Martin explained. "She wants to be Leonardo DiCaprio, or she wants to be Brad Pitt, or she wants to be David Beckham — generally those strong male influences from the '90s. Her hair goes that way, and she gets into that character." Corrin emulates these iconic Hollywood men with blonde highlights and dramatic curtain bangs, the type you'd expect to see in Baz Luhrmann's Romeo & Juliet or on the Manchester United field. "She's played a bit of football, and the hair's a little bit sweaty and is just sitting in the right place," Martin said of her inspiration.

Corrin's award show fashion, on the other hand, embraces a softer style, like her romantic Prada gown for the SAG Awards paired with glittering Cartier jewellery. As the season comes to a close, we're keeping our fingers crossed for more red carpet appearances from Corrin in the future. We can't wait to see where inspiration strikes next.

Hair
Justin Bieber's Hair Is, Once Again, Sparking a Conversation on Cultural Appropriation
by Danielle Jackson 1 week ago