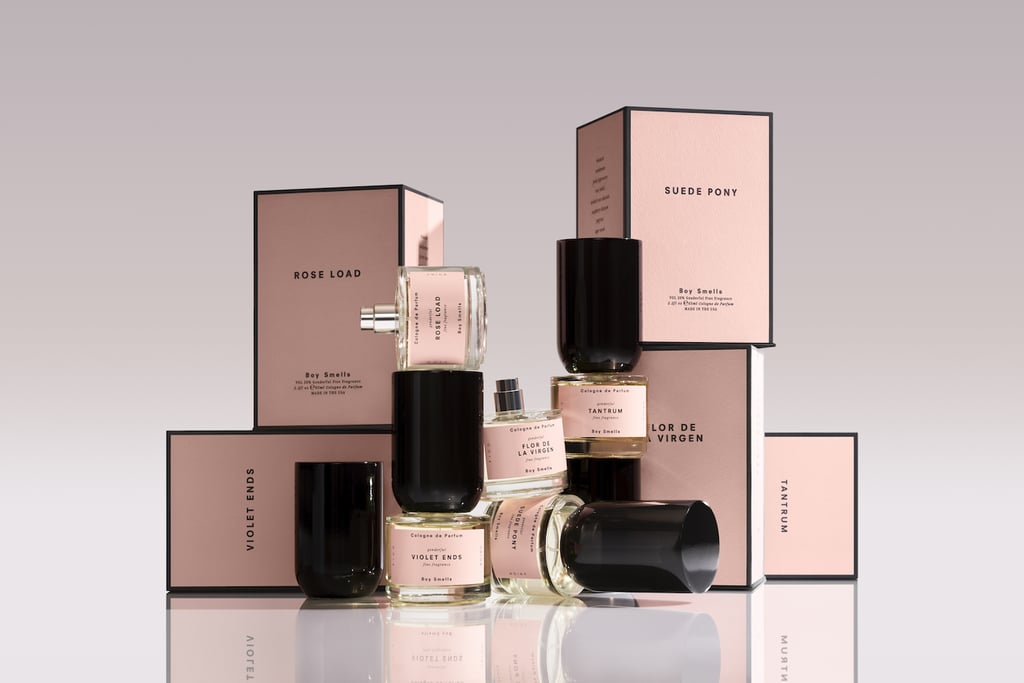 Boy Smells, the much-hyped gender-fluid candle company, is celebrating big this Pride Month. The brand — founded by partners Matthew Herman and David Kien — is not only donating $100,000 to The Trevor Project, America's leading suicide-prevention and crisis-intervention organisation for LGBTQ+ youths, but it's also launching its debut range of fine fragrances, Boy Smells Cologne de Parfum, here in the UK via Space NK.

From the inception of the brand, Herman and Kien — who started off by whipping up candles and scents in the kitchen of their Los Angeles home — wanted to explore fragrance and intimate objects beyond the gender binary. For one, they called it Boy Smells and packaged it in a pink box, which they explained to Stylist was them "purposefully poking fun at scent being assigned a gender".

More importantly, however, was what they were doing with the scents of the candles themselves. Historically, perfumes and scented candles have been marketed as being "for men" and "for women", with the notes used in those gender-specific scents also being categorised as either masculine (think musk, tobacco, and vetiver) or feminine (basically anything floral or fruity). With the Boy Smells candles, Herman and Kien wanted to blur gender lines by blending traditionally masculine notes with traditionally feminine notes to create scents that not only reflect people's modern identities, but also make every time you light one of the brand's candle an "identity-affirming moment".

The couple approached the five fragrances in the Cologne de Parfum range with the same goal of blurring gender lines and exploring identity. They coined the term "genderul" to describe the collection, meaning that each eau was crafted to embrace all the different parts of the gender spectrum. "At Boy Smells we embrace a wider view of identity, encouraging everyone to radiate their true selves," Herman said via press release. When the range originally launched in the US back in March, he told American Vogue, "We really want to create scents that mix masculine and feminine together, that are as complex and layered as the identities of our customers and reflect modern identity through olfactive structures."

The Cologne de Parfum scents were created in collaboration with perfumer Jérôme Epinette, who is no stranger to working with niche fragrance brands, creating scents for Byredo, Floral Street, Vilhelm Parfumerie, Ellis Brooklyn, and Atelier Cologne to name a few (he also, funnily enough, developed one celebrity perfume — Ariana Grande's Thank U, Next). The debut five scents from Boy Smells include: Rose Load, Suede Pony, Violet Ends, Tantrum, and Flor de la Virgen, none of which you will find amongst the original candle collection. "I don't really love to look back and put greatest hits on repeat," Herman told Vogue. "I didn't see a need to just elevate existing candle scents. I just thought it was much more exciting to create something from new."

"Creating these fragrances was an exciting and welcome challenge as I was given the kind of freedom and creativity I'm most inspired by," Epinette said via press release. "It really came down to thinking about the ingredients innovatively and slightly unconventionally. I wanted to take classically masculine and classically feminine notes and somewhat subvert them to produce something more modern, but also multifaceted, so that I could really play with the idea of 'genderfulness'. I explored unexpected combinations of woods, ﬂorals, spices, and fruits and paired them in a unique way for a bit of experimentation and to ultimately achieve authentic, bold statements that expressed an openness but also something that could feel personal to the wearer with its many layers."

Beauty at Home
I Tried Fenty Skin's New Body Scrub, and My Only Complaint Is That I Need Another Bottle
by Danielle Jackson 2 days ago

Hair
With New Red Braids, Naomi Osaka Is Really Ready to Represent Japan at the Olympics
by Kelsey Garcia 1 week ago

Celebrity Beauty
Britney Spears Woke Up to a Surprise Gift From Selena Gomez, and Now, She's Feeling Rare
by Karenna Meredith 1 week ago