The Met Gala was fraught full of both literal and metaphorical clergymen (and women) in what many are calling the most exciting Met Gala in years. Stars like Cardi B, Madonna, Kerry Washington, SZA and, of course, her high holiness Rihanna, showed up and turned out some divine costumes for the event, for which the theme was "Heavenly Bodies: Fashion and the Catholic Imagination." Yeah, The Met isn't known to play it safe.

While plenty of head pieces, face jewellery, and crosses were had, one trend we noticed on the carpet was the abundance of press-on nails. Blake Likely's manicure was courtesy of press-ons from Kiss, and even Kim Kardashian, donning a gold Versace number, had a glued-on manicure. Responding to a photo of Katy Perry taking a good look at her nails, Kim revealed Katy was in charge of getting them to her — from across the country.

Katy actually flew my nails on her plane over to me from LA LOL They are just glued on! So had to show her! https://t.co/PS34k55KUW

"Katy actually flew my nails on her plane over to me from LA LOL They are just glued on! So I had to show her!" tweeted Kim.

Kim's tone is typically playful on her account, so who knows if this story is a joke or not. If true, that manicure is well-travelled and had an interesting travel buddy, to say the least. Created by Tom Bachik, the long, square-shaped French tips makes it feel as if the '90s really are in full swing again.

Be sure to check out all of the best manicures from this year's Met Gala, along with some of our favourite beauty looks.

Celebrity News
Are Kim Kardashian and Kanye West Getting Divorced? Here’s What We Know
by Monica Sisavat 1 week ago

Celebrity Instagrams
Oops! Aliens Mistake Zooey Deschanel For Katy Perry in "Not the End of the World" Video
by Monica Sisavat 3 weeks ago 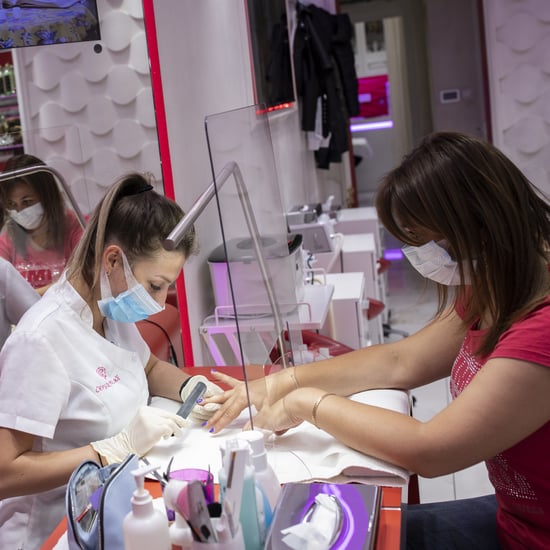